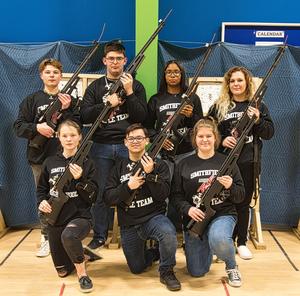 Smithfield High School - JAN 17, 2020 - The SHS JROTC Rifle Team in its first year has qualified for the Army JROTC (AJROTC) Service Championships at Camp Perry, OH in February.  Five marksmen from the team will compete in a two day shoot in the Northeast Regional Qualifier at Camp Perry while other AJROTC teams around the nation will also compete in Alabama and Arizona.  The top teams from each region will then be invited to compete at the AJROTC National competition held in March. The rifle team placed first of all  AJROTC schools in Virginia and placed 18th in the northeast quadrant of the United States.