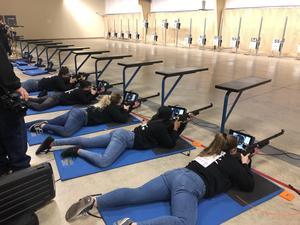 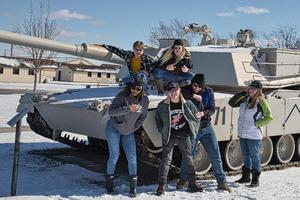 Camp Perry. Ohio – 14-17 February – Exactly one year to the day of the Isle of Wight County School Board’s approval to stand up a team, the Smithfield HS Army JROTC (AJROTC) Air Rifle Team competed this weekend in the Northeast Regional 2020 AJROTC Service Championships. The team finished 12th in the Northeast Region and 45th worldwide among all AJROTC rifle teams.  With teams coming to compete from as far as Germany and Alaska, the Smithfield HS Packers astonished other AJROTC programs by qualifying for the service championship in their rookie year.   Team Captain, Senior Noah Young, led the team with a two day combined 1026 point (out of 1200) total and placed 24th in the regional competition and 128th nationwide. All 5 shooters placed as one of the top 230 shooters in the nation.  “This was a great experience for the team”, said Coach LTC (Ret) Pete Badoian: “the team exceeded all expectations this year and the cadets are already setting team and individual goals for next year.”   With four of the six shooters making the trip to Camp Perry as 9th and 10th graders, the future looks very promising for the team.  The 6 shooters making the trip to Camp Perry were: Seniors Noah Young and Colton Butler; Sophomores, Connor Havron, Holly West and Diamond Whitehead; and Freshman, Caroline Lewton.

Without the help of many organizations and individuals the SHS Rifle team never would have been able to perform the way it did.  The team owes a huge thank you to Smithfield Foods CEO and President, Mr Ken Sullivan, for its $3 million Legacy Project donation ($1 million designated for the AJROTC Fieldhouse), and to IWCS Superintendent, Dr. Jim Thornton for his project vision.  Without this donation there would be no field house, and without the field house, no ability to stand up an Air Rifle team.  The NRA has also made two substantial grant donations to the team over the past two years in vital equipment such as spotting scopes, scope and off-hand stands, shooting mats, knee rolls and pellet ammunition and targets for the team to practice. The local Special Forces Association also provided a generous donation to help the team cover costs for the Camp Perry trip. Mr Lynn Wheeless, who runs the Patriot Shooting Club in Yorktown, VA, allowed the team to practice on electronic targets, multiple Saturdays, free of charge, in preparation for the 2020 Service Championships. The team would also like to thank Mr Tom Vranas, an air rifle expert and Air Force veteran from Hampton, VA, who volunteered countless hours assistant coaching the team this year.  Coach Vranas said, “I am so impressed with these cadets! They listened to and implemented advice improving their scores significantly in just 5 months to place in the top 50 teams nationally in their first year shooting…. unbelievable!!

Sophomore Cadet Holly West, whose competition combined score, was 998, stated, ”Next year, I want to be shooting in the finals for a medal.” The other three returning shooters echoed this sentiment.  The team will take a week off and then get back to competition shooting in an attempt to finish as the best AJROTC Team in the Virginia Rifle League for SY 19-20.