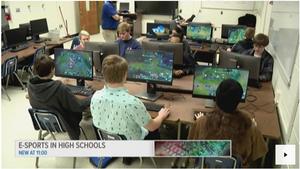 Kids in Virginia get a taste of professional gaming in high school!

SMITHFIELD, Va. — If someone told us 10 years ago that we could make it big by playing video games, we likely wouldn't have taken those games for granted.

Esports, also known as professional video gaming, is booming and it’s showing no signs of slowing down. It has one of the fastest-growing fanbases in professional sports, and one of the youngest fanbases to boot.

Business Insider Intelligence’s Esports Ecosystem Report 2020 found the esports market is on track to surpass $1 billion in revenue for the first time this year. There are some pretty big feats just over the last two years to back this prediction up.

It’s easy to see where the future of esports is headed, and this phenomenon has trickled down to our high schools -- the group that arguably knows more about video games than anyone else. Now, kids in Virginia can get a taste of that professional gaming experience in high school thanks to a new esports pilot program.

“I’m better at Pac-Man than I am at League of Legends, I’ll put it that way.”

Darrell Wilson wouldn’t call himself a professional gamer, but as the assistant director of Academic Activities for the Virginia High School League, he has learned a lot about esports in just a few months. He is in charge of overseeing the esports pilot program in Virginia.

Partnering with PlayVS, VHSL gives high school students a chance to play games like League of Legends, Smite and Rocket League in an organized league.

PlayVS is an online competitive esports platform for high schools and colleges. It helps schools easily build and manage teams, check schedules, track statistics, and connect to other schools they are facing off against each week.

RELATED: An inside look at the competitive world of collegiate eSports

Each school year has two seasons: one in the fall and one in the spring. Those seasons are divided into a two-week-long preseason, an eight-week-long regular season, followed by the playoffs. At the end of the season, a champion is crowned for each game.

The first season of the pilot program ended in January, with 37 schools across Virginia competing. Wilson says so far, things have been good.

“Being able to do a pilot year has given us the opportunity to evaluate it as we go and see the places where there may be some issues down the road, or how this would look for a larger application for our schools," Wilson said.

It costs $64 per season for a student to play at the varsity level. That’s not a steep price if you compare that to Aspen Institute’s estimate on the price of traditional sports. In its National Youth Sports Survey, Aspen Institute says it costs about $693 per student, per sport, per year.

Christopher Borum is an information technology and cybersecurity teacher at Smithfield High School in Isle of Wight County. Once the final bell rings though, he heads up the school’s new esports team.

“It’s bringing these students together that don’t get to normally play traditional sports. Not that they can’t, but it’s just not their niche," Borum said.

The group started as an esports social club last year but has quickly grown into a full-fledged team with the help of the Virginia High School League's pilot program. Right now, the team is just focusing on the game League of Legends.

The program is treated just like any other high school sport. Students have to maintain good grades and high attendance rates to stay on the team. Borum says that incentive is enough to encourage them to stay on top of their classes.

“I’ve had students come up to me that have never really shown interest in any kind of group activities, and all of a sudden they’re stepping up and taking charge," Borum said.

The students say they have a vested interest in the team.

“To do this thing that you would do at home alone with people right next to you, I think that’s really fun,” Cian Barrett said.

Barrett is joining the team for season two alongside teammate Ryan Hines. They practice two hours a day, three days a week.  Both agree that it gives them a little more encouragement in school.

“I can work with other players and work with the coaches on what I can do better,” Hines said. “It’s just a nice way to end the day.”

Coach Borum says he hopes this pilot program helps others look past the stigma and find valuable life and career lessons in gaming.

“You’re not always going to have someone right next to you. Sometimes you have to reach across state lines, country lines, or whatever to make those connections."

Hampton Roads is no stranger to esports. Virginia Wesleyan, East Coast Polytechnic Institute and Bryant & Stratton College are among just a few colleges in Virginia to offer esports as part of the National Association of Collegiate eSports.

In addition, Hampton University is creating an eSports lab with the help of a $340,658 grant from the Department of Homeland Security. Starting this year, the Historically Black Institution will offer esports as an academic course in the Department of Sports Management.

Darrell Wilson with the VHSL says that’s the whole idea behind this high school pilot program.

“Just like a football player plays football in high school and hopes to go on and play in college, it’s a similar thing for esports," Wilson said.

Wilson added that eSports has been on the VHSL’s radar for a few years as the interest grows on both the college and high school level. Students are now looking for the experience early to set them up for success in college.

Where it goes from here

Though the first season hasn’t come without some technical hiccups, Wilson says it has been a great experience for the high schools involved.

With season two in full swing, more schools are giving the pilot program a test drive. Wilson says 58 schools are signed up and more schools in Hampton Roads are on the list. Churchland, Tallwood, Warhill, Kecoughtan, Lafayette, and Tabb High Schools have all signed up, joining Smithfield High for season two.

13News Now reached out to other school divisions that said they are waiting to see how the pilot shakes out.

As for the future of the pilot program, Wilson says the VHSL executive committee will meet in the spring to discuss where to go from here.

“It could go either way whether it’s fully sanctioned or not, but I think we are hopeful to continue in some capacity," Wilson said.

Season two started on Feb. 17. Regular season play will continue until April 13. Playoffs, which are on April 21, are where the top teams play in a single-elimination format and the finalists are determined. You can watch the playoffs on the PlayVS Twitch channel.