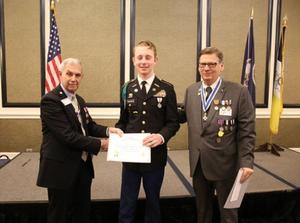 Richmond, VA - SHS AJROTC Cadet Barrett Ferguson placed first in the Richmond Chapter
and 3rd in Virginia in the Virginia Society Sons of the American Revolution (VSSAR) Enhanced
Cadet Competition. Competing against 27 other schools in the Richmond Chapter Region,
Barret’s essay and application placed first. By winning the region he moved on to state where
he finished third. His essay on “How JROTC has prepared me to be a better citizen of the
United States of America” spoke to the curricula and application of that curricula he learned
through his 5 semesters of taking JROTC and how the values of the program mirrored the
values he was being taught at home.
Mr Peter Davenport, the VSSAR President, and Mr Dennis Peterson, the VSSAR
Richmond Chapter President, presented Barrett his medal, certificate, and cash award for
winning the VSSAR 3rd place award at a luncheon held in Richmond for the competition
winners.