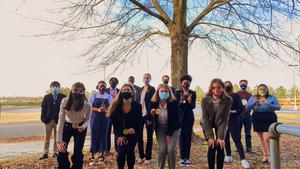 This past Saturday, March 20, the Smithfield Debate team came in first in their VHSL Regional tournament for the ELEVENTH consecutive time! They competed against debaters from Grafton, Jamestown, Warwick, Great Bridge, Denbigh.
Student Congress: Every debater in Student Congress qualified to move on to the 4AB VHSL Super-Regional tournament, but Samantha Solomon earned a 1st place win in Student Congress, having a heavy lead above the next highest competitor.
Lincoln Douglas: Jason Cox won 1st place in the Lincoln Douglas field, debating the topic Resolved: The United States ought to guarantee universal child care.
Public Forum: The team of Shelby Jones and Rachel Klinger placed 2nd and the team of Kylee Hilbert and Riley Holding placed 4th in Public Forum. They debated in a heavily contested field revolving around the topic Resolved: On balance, the benefits of creating the United States Space Force outweigh the harms.
Policy: The team of Cameron Barrett and Sidney McAlear placed 1st in Policy, pulling off a win even after not being able to compete yet before this tournament. Their topic was Resolved: The United States federal government should enact substantial criminal justice reform in the United States in one or more of the following: forensic science, policing, sentencing.
Smithfield debaters did well individually, but they all contributed to the overall team win. Congratulations to Packer Debate!