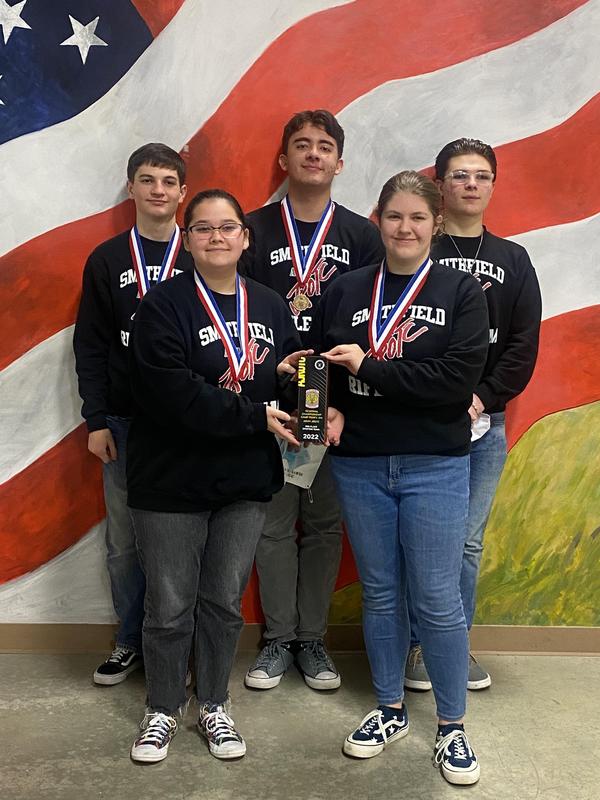 Feb 12th - The Smithfield HS AJROTC Rifle Team, in just their third year of competition, again qualified for and traveled to Camp Perry, Port Clinton, OH, this weekend to compete in the Civilian Marksmanship Program (CMP) Army JROTC Regional Championships. Their performance Friday and Saturday ranked them 19th nationally, 3rd in the Northeast Region, and number one in Virginia for all Army JROTC programs. Caroline Lewton (Junior) and team captain, Niya Young, a first year shooter, led the way placing 9th and 15th overall of 75 shooters at the regional competition. With their scores, Caroline and Niya placed 42nd and 71st respectively at the national level of 237 regional competitors (all three regions). To put things in perspective, those 237 competitors qualified to compete at the regional level from over 6000 JROTC marksmen initial entries nationwide. Both these young ladies are in the top 1% of Army JROTC marksmen nationwide.
The team success is due to its hard work and practice, but credit also needs to be given to multiple entities in the Smithfield community and beyond that have allowed the team to flourish. Without the $1M donation from Smithfield Foods to build the JROTC Fieldhouse as part of the Legacy Project, the rifle team would not exist. The National Rifle Association has provided over $6K worth of range and rifle gear, pellets, and equipment to the team through its phenomenal grant program. Many local veteran organizations: the Special Forces Association (SFA), Veterans of Foreign Wars (VFW) Post 8545 and the American Legion Post 49 have donated hundreds of dollars to the team allowing it purchase additional needed items and cover travel expenses. The team would be remiss if it did not mention volunteer coach Tom Vranas; without Coach Tom’s years of experience and willingness to volunteer his time at every practice the team would be nowhere close to where it is today.
“I never would have thought we could come this far in three years,” said Coach Pete Badoian, "but with the help of this community, administrative support from Smithfield High School and Isle of Wight County Schools, the sky's the limit for this team.”
“These cadets are improving daily and pushing each other to become better marksmen," Badoian said. "I don’t think they even realize how good they have become in such a short time.”
Congratulations Packer Rifle Team!!!!!
SHS JROTC Rifle Team Regional Competitors
Back Row (L-R) Colton Stalls, Alexander Ramirez, Connor Havron
Front Row (L-R) Niya Young, Caroline Lewton