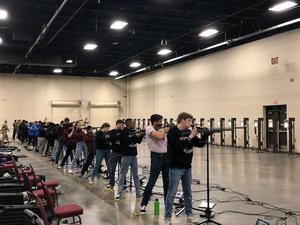 Hickory, NC, December 10th - It was a big weekend for The Smithfield High School JROTC program. The Drill Team placed first overall in their 2nd meet of the year in Portsmouth placing in all 7 events, and the Rifle Team competed as one of the top 20 teams in the brigade and placed 5th overall. The competition in Hickory, NC resulted in the Packer Marksman shooting their overall team best with a combined 1998 total after qualifying 16th with a score of 1861. Junior Nymiar Towns placed 7th overall among all novice shooters in the Brigade and Senior Caroline Lewton and Junior Colton Stalls both placed in the top 20 in the Brigade of 250 competitors.
“This year the competition was awesome and the team really stepped up and improved their score to finish 5th. What is great is they all knew they could have shot better which provides the motivation to practice even harder for the February competitions, said Coach LTC Badoian.
The Brigade consists of Army JROTC Programs ranging from Maryland down to South Carolina. The Packers are still the number one Army JROTC rifle team in Virginia. The next major competition will be in at Camp Perry, OH on February 10th and 11th in the Army Northeast Regionals. Best of luck to the Packer Marksmanship Team!
Pictured: JROTC Rifle team competing in the Brigade Best of Best Competition. From Right to left: Cadets Zach Hedgepeth, Alex Ramirez, Nymiar Towns, Colton Stalls and Caroline Lewton combine for a total 3 x 20 - 3 position score - of 1998.